We’re still trying to solidify our methodology around identifying best bets. A couple of games stood out this week in that regard: 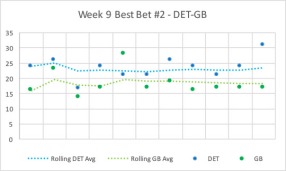 In both of those cases the crowd wisdom said that the spread was half of what it should be. And in both cases, they came through in fine style. So we’ll keep an eye on when the crowd diverges from the Vegas lines going forward and see if we can identify a trend. I did a quick scan back through the season and the crowd is about .500 when the predicted spread is around double or half of the Vegas line. Though it was trended upward the last several weeks.

On the total side, the biggest delta was on the Cardinals-49ers game with a predicted total of 31.7 compared to the Vegas line of 39, and that came through as well.

We’re certainly excited about a solid week, but of course we’re tempering it knowing that 100% accuracy is probably not sustainable. 🙂

The Westgate Super Contest consensus is back on track, picking the Colts -13, the Rams -3.5, and the Cowboys +1. The consensus missed on the Broncos +8.5 and the Falcons +2.

There were not too many games in which the crowd diverged significantly from the odds in Week 8.

The biggest deltas between the lines and the crowd predictions were:

Again, we’re not tooting our horns too much here, as we’re sure that there will be weeks in which these folks pick much better than our crowd. We just want to include these folks for perspective.

This gentleman is really sharp and provides his picks every week to the sportsbook subreddit. He’s been performing quite well through the season.

In Week 8, he was correct on the Eagles -12 and the Panthers-Bucs under 45 but missed his other 4 picks.

It was a (slightly) better week at the Vegas Super Contest. The top 5 consensus picks went 2-3, getting Seattle -5.5, Saints -9, and Chargers +7 wrong while hitting on Carolina +2 and Atlanta +4.5.

We’re starting a new weekly feature: the Best Best Report. We’ll highlight the lines that the crowd diverged from most and examine the results.

Week 7 struck me as a bit unusual because there was not one game in which the crowd diverged significantly from the Total, while there were 5 spreads that’s as a gap of 6 or more. In previous weeks, the most common best bet was on the Over/Under. 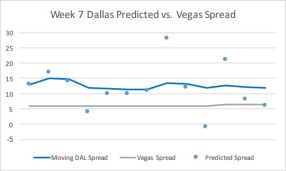 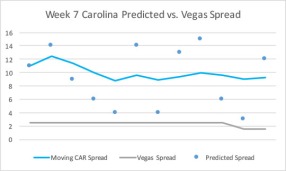 The most surprising best bet result was Bears over Panthers. Not only did Chicago cover, they won going away. Of course, they scored two defensive touchdowns when the Panthers were deep in Bears territory, but a loss is a loss. The lowest predicted spread was 3, and no one in the crowd predicted the Bears to win.

The Titans were a near-hit, but their offense just didn’t show up, and they missed the cover by 3.

On the positive side, the Jets, Saints, and Cowboys all covered quite nicely. The crowd projected a big win for Dallas, and they delivered. After Week 6, I started to wonder whether we should avoid large spreads altogether, but this week the crowd said that the big spread wasn’t big enough and was proven right.

To paraphrase from The Wire, “Don’t take credit when best bets go your way unless you also want to take the blame when they don’t.” I mention that because I scout some other sites that provide best bets and wanted to mention them as a reference point for whether 3-2 is good or not. I’ll make sure to highlight their success if they outperform us.

This gentleman is really sharp and provides his picks every week to the sportsbook subreddit. He’s been performing quite well through the season.

In Week 7 however, he struggled, getting only Dallas right of his 5 Best Bets.

Over at Vegas Insider, things went as bad as they could have. All 5 consensus picks failed to cover in the Super Contest (a contest hosted by Hilton Hotels in which competitors pick 5 games per week). The missed consensus picks are a reminder that the binary pick (cover/won’t cover) doesn’t reflect the value of wisdom of the crowd in the same way that we think Crowdsourced Scores does.

One of the most valuable opportunities we believe that the wisdom of the crowd offers is with the best bet. Our expectation is that when there is a significant gap between the line and the crowd prediction, they offer the best value. 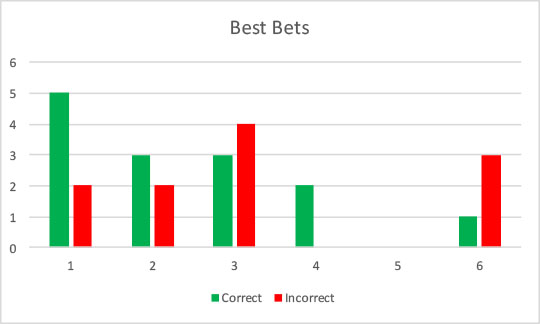 h at the moment is when the delta between the crowd prediction and the line is greater than a touchdown.

So far, such a gap only exists with the over/under, and to date the crowd is performing fairly well:

Overall, that gives us a total of 14-11 for 56% success. With a small sample size, it’s too early to make any kind of conclusion, but it’s worth keeping an eye on. We’ll add it to the leaderboard and keep tracking them from week to week.