It’s hard not to get too excited when the crowd produces results as they did in Week 15. Once again, they did very well picking the winners, correctly selecting 13 out of 16 for an 81% accuracy. They also performed very well in the over/under, picking 12 of 16 correct for a 75% accuracy rate.

What’s really important about the Week 15 over/under results is that it ticked the crowd over the crucial 50% mark, moving the season-long average to 53% (117 correct, 5 pushes, 224 total games). This is a critical indicator of our theory since the best predictors aim for 55%, and with two more good weeks, our crowd will show that they are just as good.

Separately, the crowd predicted totals that were over 10% below or above the line set by Vegas, and they went 5-2 in those games. Over the season, the crowd is 48-34 in those games for a 59% accuracy rate which is stellar.

There was something in the air this week. Users E.P. and C.A. both predicted the Ravens-Browns game right on the money. User D.K. predicted a 27-24 final between the Patriots and the Steelers for another on-the-money prediction as well.

8 predictors in Week 15, down 2 from Week 14. Thank you to those who keep returning. We cannot tell you how much we appreciate your support. Please tell your friends! 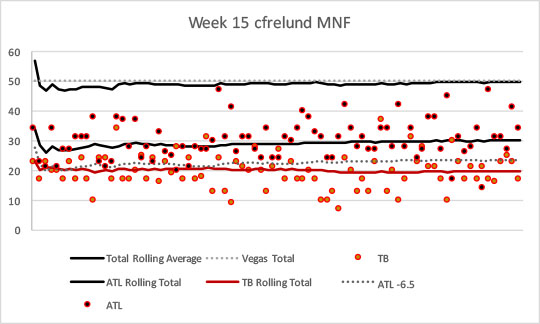 @cfrelund‘s crowd went 2-for-3 on Monday night, hitting on both Atlanta and the under, but overestimating the size of the win by the Falcons. The spread result basically hinged on the Bucs scoring a touchdown in the final minutes rather than kicking a field goal, but that’s generally why we are interested in identifying big discrepancies between the crowd predicted spread and the lines since our expectation is that, by and large, those games will be safe from a backdoor cover.

Once again I have to deny my initial instinct to pick a game in which the crowd threaded the needle as they did in the Falcons-Bucs game. Additionally, the crowd hit the spread exactly on Jets-Saints game and only missed an on-the-money prediction by two points for each team. However, this week, the crowd was really on the Ravens-Browns game. Not only did they hit the total right on the money while making it a best bet, but they predicted a big win for the Ravens, and they came through nicely.

Week 15 was the second week this season in which the crowd hit at least one category for every game. Nice work crowd! Unfortunately, that makes finding the Wearing-a-Barrel game a little harder to identify. However, I think it’s safe to say that if you had given me the Seahawks and 34.5 points, you’d have my house and all my clothes on Monday.

User M.R. had an incredible week picking the over-under with 14 while also coming in first against the spread. Meanwhile, P.M. and P.C. both picked 13 of 16 straight-up. Nice work everyone! We had 8 total predictors this week, so thanks to everyone who continued to help us out!