In general, I believe that picking the winner of a game is easier than picking either the spread or the over/under. As I have mentioned at least a few times, the sportsbooks set the lines in order to hit the 50/50 mark of betting on either side, so they want the lines to feel like a coin flip, and this by and large bears out over the course of the season. On the other hand, the sportsbook puts the value on the winners much more in line with the probability of the teams actually winning the game. In other words, if you bet on the Patriots to beat the Bills on Sunday, you would win far less money than if you had put the same amount on the Bills. By contrast, if you had bet the Bills to cover, you would have earned around the same as if you had bet on the Patriots (sometimes the books change their take slightly to optimize).

There were a few close predictions this week, but none that was within a point of the actual result. Users Paul and G.A. were the only prognosticators who predicted the underdog Jets to beat the Chiefs, and they both had the spread at 6, and that deserves a shoutout.

8 predictors in Week 13, down 1 from Week 12. Thank you to those who keep returning. We cannot tell you how much we appreciate your support. Please tell your friends! 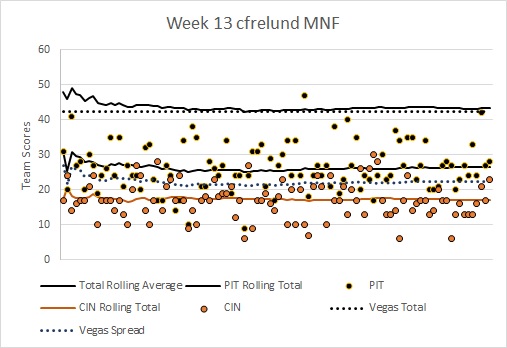 @cfrelund‘s crowd went 2 for 3 on Monday night, benefitting both from a pretty impressive comeback by the Steelers and a late line move for the total from 43 to 42.5. The crowd predicted a pretty comfortable win for Pittsburgh, so they certainly weren’t expecting the nailbiter that the game turned out to be. Given that the crowd predicted a spread of 9 against a line of 4.5, I would consider this a best bet that didn’t come through, unfortunately.

The Wisdom-of-the-Crowd Game of the Week had a few contenders this week. The crowd was expecting a low-scoring win by the Chargers with the Browns covering (a rare sight this season), and they expected a similar result in the Giants-Raiders with Oakland coming out on top. But the crowd was really in tune with the Rams-Cardinals matchup. Not only did they predict a big win by a big favorite, they were off by the final scores by 1 and 3 points in a pretty high-scoring game.

The Wearing a Barrel game this week ended up being the Thursday night game between Washington and Dallas. The Cowboys had scored 7, 9, and 6 points the previous 3 weeks. If you had given me Washington and 23.5 points going into Game 1 of Week 13, I’d be signing my house over to you wearing a barrel on friday morning.

Four users tied for the straight-up lead this week, and 3 tied in the against-the-spread category. But user E.P. (who also tied for first in the straight-up category) nailed 10 correct in the over/under for the clear victory. Nice work E.P. and to all the experts!