A few weeks ago a late set of predictions pushed the crowd to a last-second correct prediction of the Bills-Jets spread. Yesterday, the reverse happened. Most predictions favored Pittsburgh by 7 with one favoring them by 9. The crowd wisdom set the spread at just over the spread of 7. Nearing kickoff, a prediction favoring Pittsburgh by 3 brought the predicted spread under the line, thus favoring Tennessee as the pick. As a result, the final result for the crowd after the 40-17 victory by the Steelers was 1 for 3.

This brings up the subject of when to use median as opposed to the mean. When you’re dealing with large numbers that are relatively close in range, the average and the median are pretty close. However, when you have either a small sample size or a wide range, the median works better for understanding the crowd. The example I recall is you have 9 people sitting at a bar, and you want to understand the salary of each person in the crowd. Two people make $40,000 per year, three make $45,000, and four people make $50,000. So across all of the patrons, the mean and the median would be pretty close. If Kirk Cousins sits down at the end of the bar, though, the mean shoots up to around $2.5 million, but the mean barely moves.

On Thursday, the mean spread dropped from 7.5 to 6.6 by kickoff because of one prediction, while the mean dropped about 7.1 to 7.

I’ve said a few times already that, as our crowd grows in size, the effect of outliers on the mean will have less of an effect, so the difference between the mean and median will be small, but in these early days, we can still see a pretty big discrepancy. If we were to take our crowd wisdom to the sports book, we’d want to make sure that we had both data points in order to make the best-informed wager.

I blame myself for the crowd result on Thursday night. I posted our prediction to Twitter in response to Ms. Frelund’s tweet for scores, and at the time our crowd had favored the Steelers, so that’s who I was rooting for. It wasn’t until the third quarter that I realized that our crowd flipped sides on the spread, and at that point Pittsburgh was already pulling away and I couldn’t bring them back. I’ll do better next time in my rooting influence. 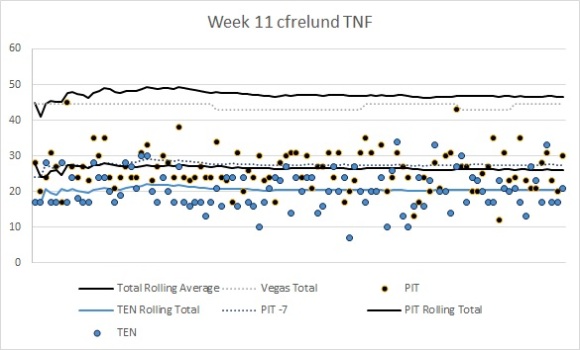 Cynthia Frelund’s crowd (@cfrelund) also went 2-1. Some members of the crowd predicted some pretty big victories for the Steelers, most predicted relatively close games with Tennessee covering but still losing, and 25% picked the Titans to win outright but usually by a small margin. Ultimately, the average spread was about 5 (Tennessee covers) and the total stayed above the line of 44.5.