Tl;dr: the crowd ended getting both the total and the spread correct, but they didn’t see a lot of value.

As you can see in the chart, for the first half of the week, our crowd expected the Bills to cover the 3 points against the Jets, but then the pendulum swung back to right on the spread, and a last-second flurry of predictions towards the Jets pushed the predicted spread to Bills -2.5. Meanwhile, the total hovered right around the Vegas total of 43 and ultimately finished at 44.2.

So in the end, at least with respect to the spread, late activity by the crowd ended up proving their wisdom correct. As we have discussed in the past, we would expect the crowd to have the most information as close to the game as possible, so if the crowd prediction is hovering close to the lines set by Vegas, these late predictions could push the crowd closer to what may end up being the actual result

As a reminder, the larger the crowd, the better it performs, so please tell your friends to join us!

While I am happy that the crowd got 2 out of 3 predictions correct, I think that perhaps the larger message would be that there isn’t a lot of value in this game. If the crowd only sees a small discrepancy between the Vegas spread and the predicted spread, it should be an indicator that the line is probably not worth betting on, and that’s valuable by itself. 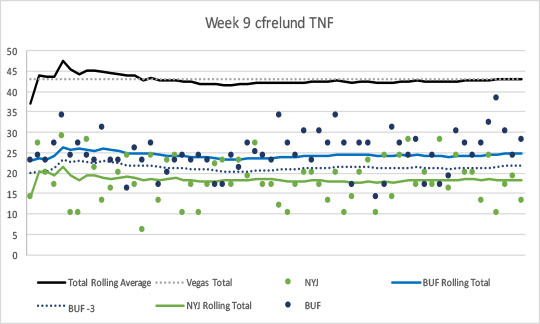 Cynthia Frelund’s crowd (@cfrelund) had its second 0-3 game of the year, but as you can see, her crowd did not see a lot of value in the total either. The crowd did overestimate pretty consistently a Bills victory by a reasonable margin. But upsets happen, and the overall trend for her crowd is still solid.