On Friday, I wondered whether the TNF game between the Dolphins and Ravens was a dead parrot or one that was just resting (the context is all in the article and is too long to go into here). After Week 8 concluded, the answer was, maybe both? 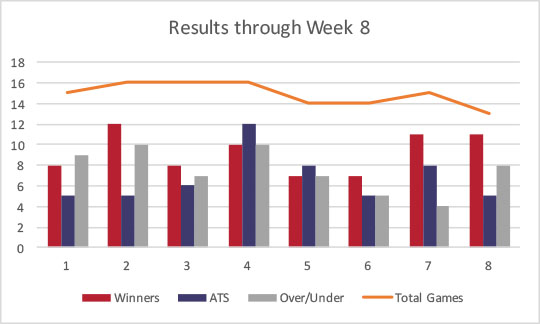 So in a way, the Thursday night game was a prefect microcosm of Week 8 as a whole, and the parrot was both alive and dead. The crowd was aligned with the winners (11 of 13!) and the totals, but it was off regarding the spread, just as it was on Thursday. We’ll keep an eye on Thursday’s going forward to see if we can identify trends ahead of the Sunday games.

With only 8 predictors, we could use your help to grow our crowd. Please tell your friends to add their wisdom!

Another Near-Hit On the Money Prediction by the Crowd! 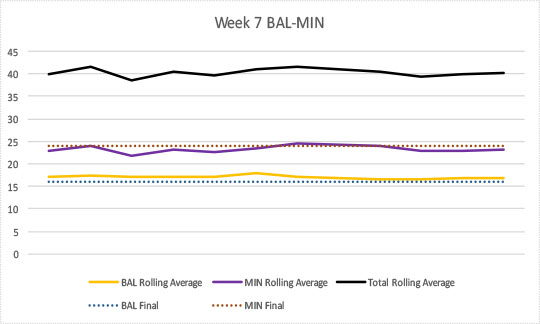 I have to repeat that accuracy is nice, but identifying value is the real benefit for the wisdom of the crowd. Still, it’s nice to highlight when the crowd almost nails a score. In Week 8, it was Falcons-Jets.

The crowd predicted a 25-21 victory for the Falcons and the final ended up being 25-20. One interesting thing to note about this game is that the spread of the game moved to Falcons -6.5 by Sunday morning, so the crowd ended up hitting the trifecta, though had the line stayed at 4.5, they would have missed it.

That’s one reason why we’re trying to identify value in betting lines. The delta between a 4-point victory and a 4.5-point spread indicates very little value; the gap between 4 points and 6.5 points obviously indicates more. As our crowd grows in size, we believe that we’ll be able to identify more regularly the lines that have the most value.

8 predictors this week, down 8 from last week. Thank you to those who keep returning. We cannot tell you how much we appreciate your support. Please tell your friends! 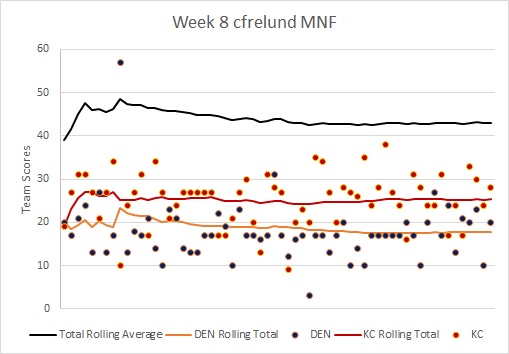 @crelund‘s crowd, along with you all, picked the Chiefs and the total to go over the total of 43. One other interesting tidbit is that the most common Chiefs score (also known as the mode) was 27 and the most common Broncos score was 17, so the final of 29-19 was quite close to the most common scores. A Twitter follower (@GlobalScout) suggested that 27 and 17 are both pretty common because they are a common combination of touchdowns and field goals (one or two field goals, no safeties or missed PATs), and looking back at previous weeks, that appears to be the trend. However, I thought that the delta of 10 between the modes mirroring the final score was worth tracking.

The WotC Game of the Week

The Falcons-Jets game would be an easy selection for the WotC Game of the Week, but the game that stood out to me was Bears-Saints, particularly because it was a thread-the-needle game of the underdog covering the spread without winning outright. Additionally, the crowd had a best bet on the total, predicting a 5-point difference between the over/under and the actual total.

There was only one game this week in which the crowd missed all three predictions (nice work crowd!), and it was (sigh) Raiders-Bills. The crowd’s perception of the Raiders this year has been consistently high, and it have missed every loss so far. And of course, if you had given me the Bills and 19 points, you’d have my house and I’d have a barrel.

Here are our top performers for Week 8. Congrats everyone and thanks against for your help!